A little bit about me. 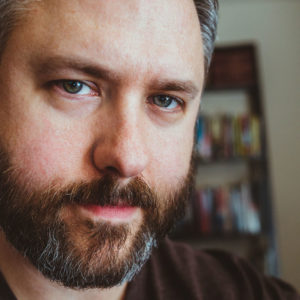 I’m a multidiscipline graphic designer and web developer based in Katy, Texas. Art, design, and technology has always been something that has been a passion of mine from a very young age. In the early 90s, our family got a desktop computer. Soon after, I discovered computer graphics software and the World Wide Web. I became hooked! Adobe Photoshop, HTML, and Netscape Navigator became my new creative tools of choice.

I was born and raised in the small railroad town of Galesburg, Illinois. Since before I can remember, I knew I wanted to do something artistic with the rest of my life. While in high school, I received the Jimmie Crown Award. I earned this honor because of my involvement in the creation of the first computer-based graphic design program in the state. The head of the art department and I were always discussing computer graphics. He and I decided it would be terrific if the school offered a computer graphics course. We then worked together to form what became two classes. One, focused on graphic design software (Photoshop), and another on desktop publishing. I then petitioned (and won the right) to get two of my elective hours replaced with assisting in the teaching of Photoshop.

After, I attended The Illinois Institute of Art. I then came to Texas for greater opportunities and earned a degree at the Art Institute of Houston. But, most of what I know today about design and the Web has been self-taught or from many influential mentors, friends, and coworkers.

For the past 15 years, I’ve had the honor of working with a talented team of developers at a healthcare management services company in Houston, Texas. My role focused on UI/UX design of many responsive web sites. It’s always so fulfilling to go from ideas on paper, to mockups in Photoshop or Figma, to fully-functional .NET websites using the latest CSS libraries and frameworks.

Going forward, my goal is to find new opportunities to continue to learn and grow, but also allows me to teach and lead others. I can’t wait to see what happens next.

You know the old adage — When one door closes, another opens.